Bicycle racers Robbie & Teddy King, born and raised in Brentwood, NH were original and strong supporters of the King Challenge and continue in being instrumental to its success. Their father, Ted, a respected surgeon and stroke survivor, is a very active member of the Krempels Center community. There is a strong King family connection to the Center.

Robbie retired from professional racing in 2010, but still rides regularly — not an easy task now as a doctor in Portland, ME. Father Ted and Mom, Margie are both huge fans of the King Challenge and its support of Krempels Center. These days Ted rides the eponymous Doc King Adaptive Tour and Margie rides the 30 mile option. Those are two well recognized, friendly faces after the ride when the party kicks off. And Teddy retired from a ten year professional cycling career in 2015, only to continue with the bicycle prominently in his life as an ambassador for all things cycling with an emphasis on gravel riding. The King Challenge now features three generations of Kings with Teddy and wife Laura introducing their daughter Hazel to the event in 2021. Little brother Hayden will make his King Challenge debut in 2023!. 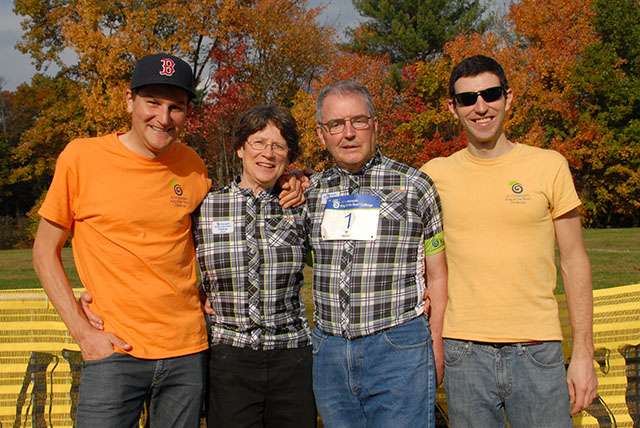 Margie, Ted, Teddy and Robbie King at the 2014 Krempels King of the Road Challenge

That was followed by three years of domestic professional racing, the first two of which with Robbie as a teammate. With a growing list of top results, Teddy made the leap to the European peloton in 2009 as a member of the Cervelo TestTeam.

A four year stint with the Italian heritage Liquigas and Cannondale-Liquigas teams put Teddy in the racing trenches. Dozens of wins spawned during this period racing for the likes of Peter Sagan, Vincenzo Nibali, and Ivan Basso. 2015 was Teddy’s final professional year. He announced in May of that year while racing for the American Cannondale-Garmin operation that with ten years complete in the pro ranks, “I wanted to escape with my health ad my sanity intact.” Success! Teddy competed in the world’s biggest races including the Tour de France, Giro d’Italia, Paris-Nice, the Tour of Flanders, Paris-Roubaix, and the World Championships. As the consummate domestique, Teddy has dutifully served teammates who have won world championships as well as all three grand tours.

Growing up in an active family in Brentwood, NH, Robbie participated in all kinds of sports and recreation. A lifetime of athletic mediocrity came to a speedy end the moment he joined the Holderness high school’s cycling team.

Robbie’s ensuing undefeated rookie season crystallized his love of the sport. At Colorado College he won national collegiate championship titles in both junior and senior years.

His dad’s major stroke at the tail end of his senior year drove home the point that you have one chance to chase your dreams. Those dreams led him from coast to coast for most of the following decade racing on several teams as an elite amateur, then as a professional with the Priority Health then Rite Aid teams. Four of those years were spent with brother, teammate, confidant and friend, Ted. Now engaged in medical school studies at Columbia University, Robbie occasionally races as a Category 1 rider.

Ted King, an orthopaedic and hand surgeon, practiced with Access Sports Medicine and Orthopaedics in Exeter, NH, for 25 years until experiencing a right hemisphere stroke at home. He was treated with intravenous TPA (clot buster) at Exeter Hospital within the critical three hours of onset. Now an active member of the Krempels Center in Portsmouth, Ted is married to Margie and is the father of Robbie and Teddy.

He is a visiting lecturer at UNH School of Health Sciences in the Occupational Therapy Department.

Physically active, Ted walks in his neighborhood daily and rides an adaptive recumbent bicycle in good weather. His pre-stroke passion for competitive sailboat racing is undiminished; he often participates in disabled sailing regattas around the US.